Well we knew it was coming and there was the usual inadequate response  from our menagerie of leaders.

It’s like being in the first five to ten minutes of one of those post apocalyptic movies. Everything is in slow motion, the discomfort and the surreal nature of the stock piling and panic buying. I passed a lady in the store today, six packages of toilet paper, six packages of paper towels and a bag of Doritos, I am not sure what is going on.

Am I supposed to be stocking up, and if so what should I get? Water? Noodles? Rice? Flour and other staples? What to do?

The other shoe will drop I am sure.

I have been feeling unwell, I am pretty sure it is not real but still.

I woke up concerned for my mum, six thousand miles away, she is aging and with Lymphoma, alone and fearful. With the travel restrictions in place I am not sure if I went to see her they would let me back. I am not ready to be an orphan and I am passed fifty. Do you take off to help the aging or stay to look after the young?

They had a news show, facts versus fear, it was sensationalist. Like the T.V. in the background of that movie, mumbling away as people attempt to go on as normal. This is where CNN has ended up, Ted Turner would be shocked I am sure. Fox is worse still no real news just opinion. We have been watching PBS and listening to NPR to try and stay aware.

It’s a little odd to be finding out about shows I would have liked to see because they are postponed, I didn’t even know Califone were in town, now they are not.

There’s going to be an outbreak of reading and talking to each other as sporting events and concerts and theater is being cancelled. If I was paranoid I may think the government are out to control us, we will see if the election is postponed!

Its official it’s a national emergency, and the UK may end up on the ineffectual and half thought out and ill considered travel ban. Any chance of getting back to see my mum is now lost. She is doing okay but is lonely.

The entire day has been taken up with planning for the Corona problem. Staffing, looking after clients and then the need for people to work form home. Luckily their is not much apparent sickness amongst the staff so far.

I am coming to terms with a strange fact. I may not be able to just push through this like other emergencies. If you get sick you have to stay home, can’t push through work it out or any of the other idiotic and silly ideas we have had in the past. It is also outlining the problems with the American need to work when sick.

To top it all off it’s snowing/raining and my windshield wipers have stopped working.

We engaged in some stocking up at the grocery store, probably a bad decision for four of us to go, and made only half joking statements about buying a gun or two. The decision was pushed down the road.

Still thinking about the gun, been binge watching the Walking Dead and realizing how disappointingly dangerous this all is.

The president has “tremendous control of the virus” we are now officially doomed.

Figured out how to online shop in the UK for my mother, at least she will get to eat now and won’t have to go out.

It was fun watching Anthony Fauci basically contradict the president with science in front of him, oh how we howled.

Gun sales have increased in the USA, only in this country would we decide to do this.

Off to work  and dropped the jeep into the shop to have the windshield wipers fixed, typical jeep shit going on have to wait three days for the part, if I had done the work myself it was a two week wait for the part, go figure. The jeep however is essential for the coming apocalypse.

My mum has decided that she needs so many things, that online order is really getting out of control, she is however stocking up for something that looks like it may be a long wait indoors, I hope she can stay healthy.

The Great Orange one has finally come to some sort of realization of the shit show, no longer is he in control but he is also not accepting any responsibility for the mismanagement of a crisis.. Let’s face it he usually gets to lie and run away from responsibility, history will not view this man well.

I have been binge watching the Walking Dead, well an episode a night is not a binge but it has dug into my listening time. So tonight’s fun is this German compilation of The Hawkwind Collection with some dodgy and odd versions of Hawkwind classics. Lets face it all of the songs are here but they are never the versions you want, sometimes abridged, other times just pointless, released in 1986 it manages to encapsulate everything bad about Hawkwind collections from the eighties. However I have to admit I got a little excited when I found it as it took me back to those original days of buying Hawkwind vinyl, then as I played it this evening I was reminded of the huge disappointment buying Hawkwind vinyl could be in the eighties. The best things about this album are Dealing With the Devil and Bring It On Home. I also like the frantic version of Urban Guerilla as well.

As you can see it also has  one of the worst album covers ever. 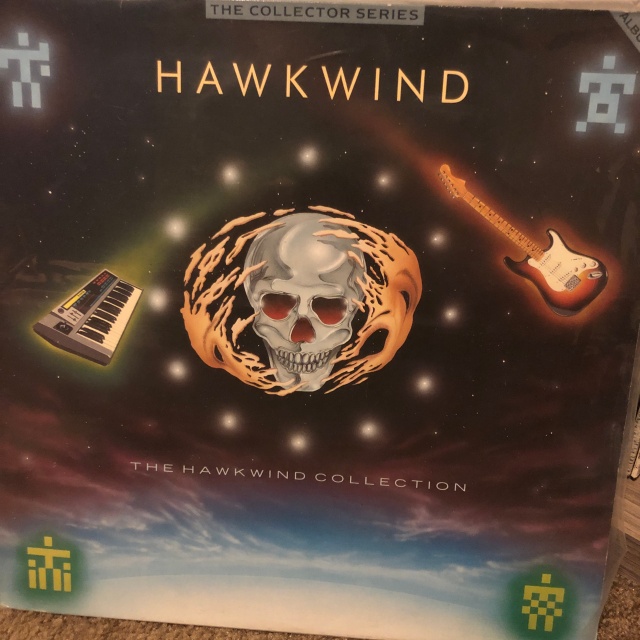 One thought on “I’m a derelict dweller.”