1976 I was 10 and fascinated by David Bowie, T-Rex and Jethro Tull. In the future was the oddness of The Clash and traveling in the back of my cousins Hillman Imp around the back lanes of Merseyside and environs to see various bands ultimately ending up at Earls Court for Pink Floyd and the Wall in 1979. By then I was 14 and ready to strike out on my own.

Neil Young however was on tour in the US. It would be another 5 or 6 years before I paid attention to him and he didn’t care it seems. In fact he still may not care, who knows apart from him and he may not remember. It’s probably just as well though as it seems I was fascinated by loud electric guitars, feather boa’s, makeup and codpieces, Neil is only known for one of these and I’m not saying which one. I was also in thrall to cousin Tony who seemed to believe any music that was American was anathema.

Neil was playing marathon sets with an acoustic and electric section, Joel Bernstein and Cameron Crowe were on tour with him compiling a copy of every song performed, they only managed to compile the acoustic songs before heading out in their own stoney way for something else. The Joe Bernstein tapes were pilfered and turned up as a bootleg for years. I am sure I had a copy at some point in my file sharing bootleg years. There is probably a hard drive mouldering somewhere in the shed with a copy on it, it probably  also has a wealth of Floyd, CSNY and other masterpieces.

Songs For Judy came out last year on the Neil Young Archives meandering releases. Hopefully at some point the electric set will surface as he was on fire on this tour. What we do get though is an incredibly well curated double album of all the Neil Young acoustic songs you would want to hear performed in your own solo show if you had the choice. It’s also from a period of time before he started using the too sweet higher pitched voice he seems to favor for acoustic songs today.

There is however a sense of only getting half of the story. Anybody who is not aware of the tour, or unwilling to read the sleeve notes, could be forgiven for thinking this was an acoustic tour. Unless Neil decides to release another collection then that may in fact become the dominant opinion. Regardless of what I want he seems to have distracted himself with a couple of movies and some other stuff so we will see. There is also the rumored Ragged Glory re-release with extra songs and all sorts of stuff and he needs to release Weld and well the list goes on.

So this evening this was just the sort of calming album that was needed to noodle away  what is left of the day.

In other things a lot has been going on, there have been the overwhelming human crises that maybe one day I can write about.

So we have managed to clear enough land this year that we can actually start the process of getting back to the country. A garden is planned and a project with the County to restore the creek banks to a more natural environment. Next year we will be planting more native plants along the creek, pulling out the fence that has collapsed into the water and generally having a whole lot of fun I hope.

We also managed to cross the creek in the back and get into the back 5 acres and head out to the old logging road backing up to approx 50,000 acres of forest. It’s dense back there and hard work but good to know we can get there now. 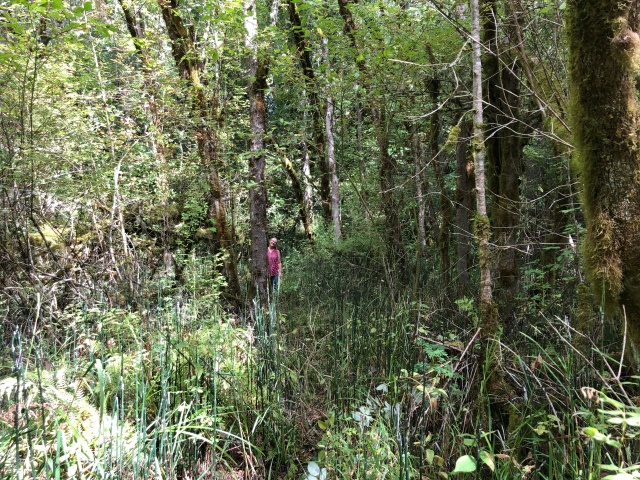 Michelle got kind of lost out there, only game trails and some dense dense ash and alder forest. The neighbor says he saw a cougar  the other week, we make enough noise to scare anything away though.

Syd was also a bit lost in the ferns, he moves too quick to get a good picture when he is excited.

The beaver have been cutting our trees down almost as fast as we find them in the overwhelming berries.

For those who need it the necessary tractor shot. It was really early as we were moving trash out of the woods. The old toilet is gone, my idea of making it a planter was frowned upon very quickly.

3 thoughts on “how’s the business Neil…”