Late at night when things are quiet and the house is sleeping, sometimes it’s okay to send your mind back to the dim and distant end of the 70’s and hit the nostalgia button hard.

Long ago before the discography got so convoluted and compilations started breeding themselves Hawkwind released Roadhawks. With three hard to find tracks on album in a live version of You Shouldn’t Do That, and the singles Urban Guerrilla and Silver Machine and before the days of bloated epic/extended/special/boxed sets, the compilation was an art form to create. There is something pleasing about the flow of the album starting with Hurry on Sundown and ending with The Golden Void. Every track flows into the next and makes sense. They don’t take the time to make compilations this way any more. The work put into the sequencing and the selection of songs makes this an essential Hawkwind album.

This compilation was my entry point for Hawkwind, borrowed on cassette from the local library and now I have my very own copy in a 1984 reissue on the Fame label and it’s a gatefold. This is making me happier than really reasonable.

Also it has an incredible album cover, the terrifying Hawkwind juggernaut barreling down the road headlights blinding you, death at the wheel. It looks like a 50’s advertising poster for all the wrong choices, making for a great package. I never really understood how cool the album cover was on that stupid tiny cassette until I held the actual album in hand. My only sorrow is I don’t have the cool poster that came with originals.

Back in 1981 me and my friend Andy were in a record store. This was not unusual and probably happened most Saturday’s, after several hours of decision and indecision he was buying Stevie Nicks album Belladonna. I was considerably poorer than him and was buying an album out of the cutout bin, it was Wave by Patti Smith.

Both albums had women in lace holding white birds on the cover. One looked like a mysterious witchy type who would break your heart, the other looked like she would drag your sorry ass through several types of trouble and then leave you broken and asking for more.

Wave by Patti Smith is a rollercoaster ride through punk rock, psychedelia, pop music and esoteric noises with a Byrds song thrown in to keep you confused. You can dance to this but you have to be channeling some serious demons to truly keep with the beat. The lyrics will screw with your mind, covering religion, politics, drugs and insanity and the music will take you right along.

Back in 1981 I had no idea that this was apparently the most conventional of Patti Smith’s albums. I guess Todd Rundgren had something to do with that.

I bet Andy has not listened to Belladona since the eighties ended but Pattie Smith’s Wave is still on rotation here in the boonies.

I have no words to describe the joy this album has brought me today/this evening.

I always get lost trying to explain, however there are some albums that you lay down and put your head between the speakers and close your eyes and drift away.

Klaus Schulze was my entry into electronic music and I have never got past the enjoyment of listening to his works. Yes he has had some weirdly off putting periods but in general his work is rewarding challenging and listenable.

Sequencers, strange bleeps and those wonderful rhythms, first a drummer and then an electronic musician this has led to a different feel for the rhythmic elements of music that to my ears make it more listenable.

Anyway with no more words about it I am going to just drift away here on my second go around with this album.

Have I told you about Dan Stuart?

So here we are with The Unfortunate Demise of Marlowe Billings. This time Dan is collaborating with lucha libre masked Danny Amis of Los Straitjackets. It’s been a long strange trip as they say. We have travelled through anger, pain, revenge and now here we are with our hero staring through the bottom of a Tequila glass and reflecting on travels, travails and sorrows. 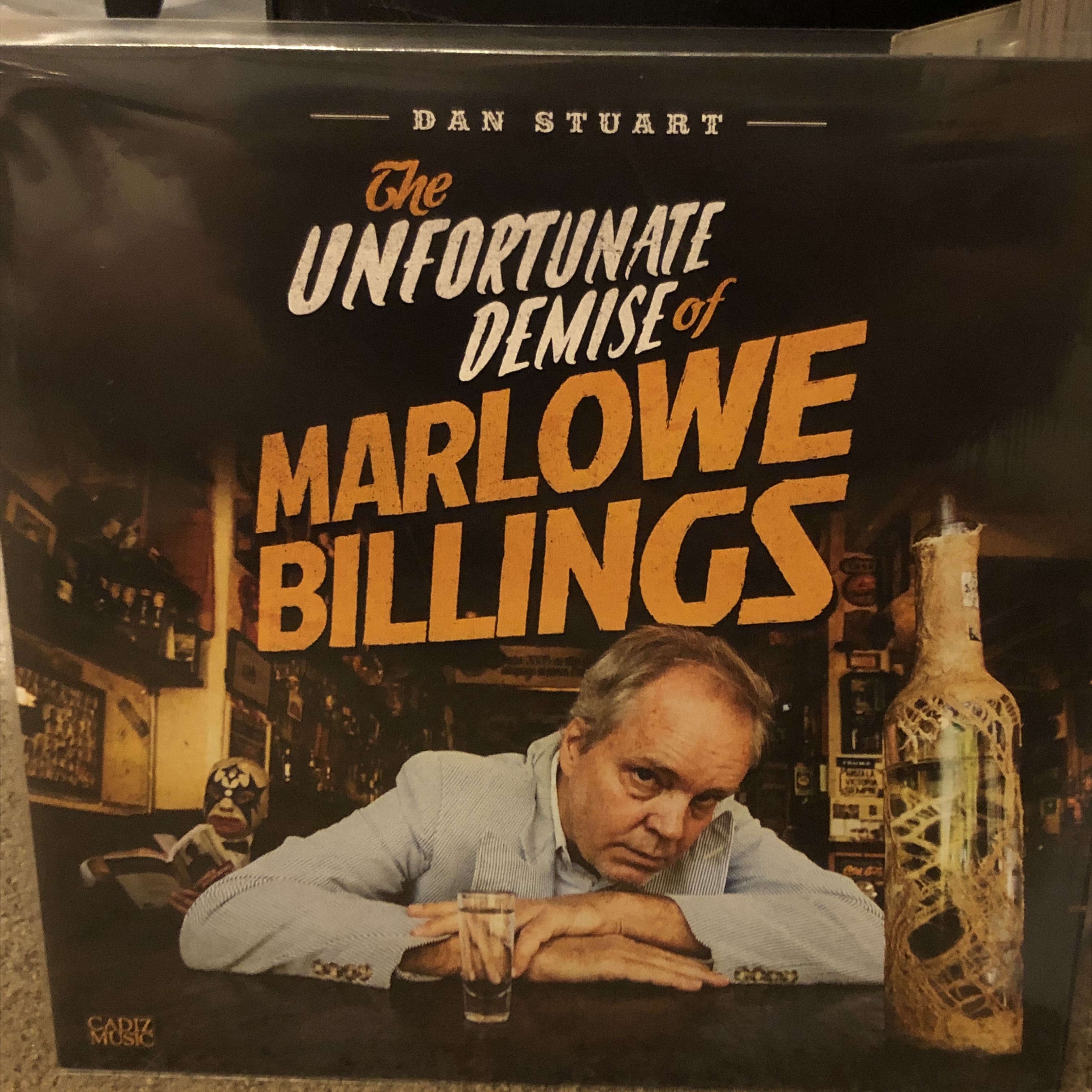 There is still a sense of bitterness and anger, tempered by a much wearier sound. Almost soul music at times distilled through a peyote fueled nightmare and a world weary world view. It is the music that happens after the bad trip. As with the other Marlow Billings album there is a sense of autobiography about the album, a weariness and a sense of no regrets.

It’s a great end to a recording career apparently. Stuart has expressed a disatisfaction with the current habit of listening to records on shuffle. He has therefore decided to stop recording albums, he is however committed to continue recording songs.

Dan Stuart still sounds dangerous and there is a feeling that he would be very happy to set aside the gentle Americana vibe, strap on his Gretsch and blow your mind with some significantly raucous punk rock roots rock. The characters of his songs slink through life creating havoc, ripping you off and leaving you penniless and alone wondering what happened. It’s a life you want to look in on but nor have roll around in.

Here and Now, that strangest of bands part hippie part punk and all over psychedelic.

I remember being dragged across the field and down the road to sit on the floor of the C.F.Mott cafeteria to watch a strange band of rogues perform for free. Outside was a bus and a truck with the P.A. Inside was a mad hatters party of noise and scents and whirling dervishes of barefoot girls dancing. I had never seen anything like it before or since.

At the mid point of the concert the roadies and those beautiful barefoot girls passed the hat or bucket to pay for the show.

Then the music started again, beginning as edgy punk and then disintegrating into sonic meanderings reminiscent of Hillage and Gong at other times they sounded like Yes or Genesis but the lyrics were about now. It was a lot for a 13 year old to take in all at once and that smokey hot room lives in my memory as one of those defining moments in life. It was possible to be free and do what you wanted and meander. For awhile it was true.

A week later I learned that they had been the music behind Planet Gong with Daevid Allen, it was strange to think of that but made complete sense.

The next time I saw Here and Now I was older and they were charging a pound to get in, the girls had left and Steffie Sharpstrings had joined Gong, the jams were over and reggae was in and the songs were shorter. It’s not that it was bad, it was just different.

From that 1979 tour is “All Over The Show” an album capturing the intensity, insanity and fun of a Here and Now gig. It’s rough around the edges, the singing is hesitant but it takes you right back. If I close my eyes I can smell and feel that close packed sweaty room.

So I went crazy with the tractor this afternoon and munched up a significant amount of berry bushes, I may get the garden going in time to plant something although I have to build a fence to keep the deer out. I do however need to pull the old barb wire fence that is overgrown with berry bushes and keep mowing the darn berries. Michelle bemoans the berries being gone, there are however others to eat and make pie.

That most unfocussed event the celebrity fundraiser. Endless troops of stars appearing on stage to mumble there way through the back catalogue and raise some money for a cause they are not necessarily connected to.

Number 1. being this was Dylans return to performing and he may be the best reason. His set is strong and assured, accompanied by Harrison and the boys in the band all to good affect.

Number 2. it was literally five dollars and in great shape.

Here we are Day 3, no records bought, feeling strong and in no way ashamed to have pre-ordered Neil Young’s Tuscaloosa and Dylan’s Rolling Thunder L.P.’s.

Gong, the anarchic multi-dimensional jazz/pop/rock ensemble somehow labelled as a Canterbury band. Yes Hillage and Allen started out in various bands from that area but Gong are really so much more European than that. I know in the age of Brexit such a thought may be untenable.

Those wacky Gongsters sang about the dreaded weed and pixies and teapots and pussies and all sorts of other subversive things. They managed to be counter to the counter culture and make some amusing, fun and bewildering albums along the way. Here we have a reunion of some sort in 1977, at a 24 hour show were several incarnations of Gong performed along with some solos spots from Daevid Allen, Steve Hillage and Tim Blake, the whole shebang ended with several hours of the “classic” or most famous version of the band.

There are some strange edits, mid song and it sounds like it was recorded by some stoned European, which it probably was. The music is as ever for Gong as bewildering mix of psychedelia, jazz and slightly naughty at times in-jokes. It does however manage to capture the essence of what is a unique band, yes they are annoying at times but they make such a joyous noise that you can forgive the dodgy lyrics.

If ever you have the need to truly confuse the people you live with Gong will do that for you pretty simply. They could lead to separation, divorce or if you are lucky your children striking out on their own to leave you with space to spread out.

In other news it is day two of don’t buy any records may. This is caused by the rash decision to buy a tractor.

Here is Ben giving it a shot, who knew that it would have a cell phone charging socket, the world has surely lost its head.