I was sat here towards the end of the day and thinking. This is often my way, everyone is in their room or bed and here I am alone slouched on the couch, the dogs laying on the a/c vents keeping the house too warm as they cool down. As I said I was thinking/listening to some music. In this case it was the most recent Blitzen Trapper album, Wild and Reckless which continues the bands blend of folk, prog-rock, tricky time signatures, stadium rock choruses and catchy pop songs via some histrionic Queen like vocals. 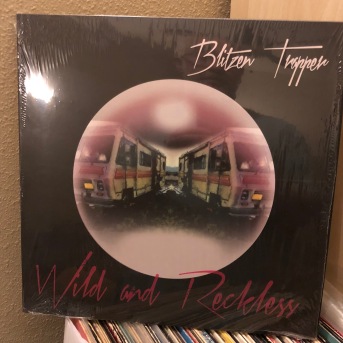 So zoned out towards the end of my wakeful period I thought, “do I still have favorite bands?”

I now own more physical music than I ever did as a teenager, according to discogs over 1,300 records, thats the large black and other various colors, this does not count the CD’s in the attic of which I have no way of knowing how many  other than there are five boxes. I also have access to a streaming service that we pay for as it seems the artist should get something out of me and my families addiction for musical sounds however little.

As the 90’s began and I prepared to leave the homeland for the USA I had 312 records total. I sold most of these as I thought I was moving on to CD’s never to look back and it seemed too much hassle to pack them for a 6000 mile journey.

Thinking a little harder I tried to decide what would make a favorite band. Is it owning the entire discography? Is it going to see them play live? Is it the collection fo aran knowledge rattling around the fevered balding head? Or is it when you find yourself humming a song you have heard many times just to calm yourself down when things get tough about 4pm and you should have left for home?

So here I am on the couch as the sweating a little as the dogs have covered all the vents realizing that as I move into my alleged middle years  I am still the fan boy music fan. Able to realistically say that is one of my favorite bands.

These days my choices are broader as I am past the strict demarkation lines of tribal loyalty. I do however realize that if by some strange chance there was a call to arms for the true Hawkwind fans in the Portland metro area I would pull on my faded levis and converse with my Sonic Attack t-shirt and head out to do battle with the forces of evil side by side with my brothers in arms. The same is true if I was called to the bar by my fellow Fairport Convention brethren to raise a glass of real ale in battle against the Coors and Bud Lite swilling country hordes.

There are now many favorites over many genres, bands I never thought I would buy a record by never mind listen to on the radio. Bands I would have mocked for their lack of originality or musicianship.

Strange thing this maturity, it seems to have simultaneously cured my blinkered allegiances and created some firm thoughts. At least I have not become conservative in my viewpoint or politics along with some of my besuited peers.