The mythology of rock’n’roll seldom recognizes the importance of the Welsh to the art form. Not only did the Welsh provide the world with the important parts of Stonehenge and because of this  a lifetime of free festivals and back to the stones moments, they also gave us Bill Graham’s favorite band that was not the Grateful Dead or some other band from San francisco.

Sometime in the dim and distant 70’s a Welsh band played the Filmore and so impressed the diminutive music mogul he paid them a bonus, an unheard of thing, and introduced them to John Cippolina, the guitar maestro from Quicksilver Messenger Service. Immediately a connection was born around volume, guitars and jamming, and drugs of course there was drugs.

This heady brew led to one of the great live albums in Maximum Darkness which is a jam packed joy of guitaring and singing about bananas, guitars and drugs. Three guitars, bass and drums all turned to 11 and rocking out for that true West Coast meets South Wales sound. It’s also got one of the best record sleeves ever.

For years the rumor circulated that Cippolina’s guitar had been overdubbed by Mickey Jones but none other than the great Deke Leonard has reassured us that everything that sounds like Cippolina is Cippolina and that’s all I or anyone else should need. 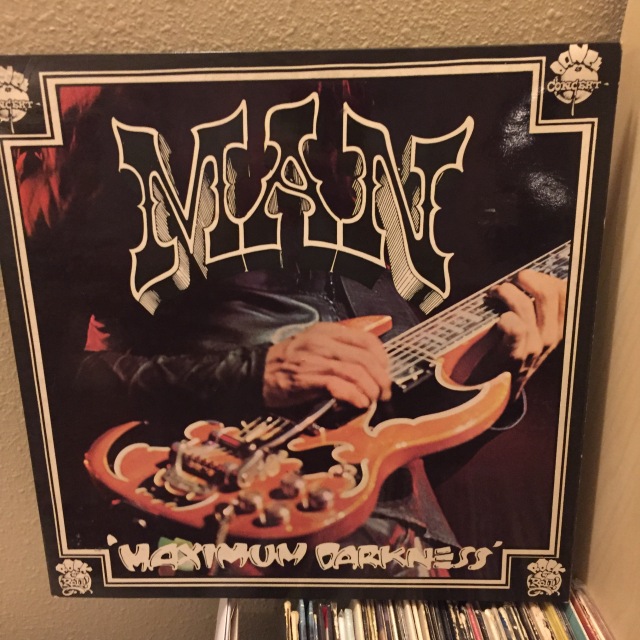 It’s been a few weeks of adjustment. New watch and all it brings and some other stuff that is percolating in my mind.

Things are moving along though, although a tree fell in the forest.

Well not so much the forest as into the creek. This does however leave a great vantage point to spot the encroaching clouds/interlopers and other malcontents. I feel a real root ball art project approaching.

The attempt to get back to the country has been delayed by retiring planners at the county and the manufacturer of the home deciding to make the dining room too small, the kitchen too big and putting the sliding door in the wrong place. All of which resulted in some tense phone calls, driving several hundred miles to show them where these things should be along with the approved plans that were sent to them months ago.

Suddenly things have gone very quiet and it looks like we may actually have some movement, the slash piles are being burnt, there are stakes in the ground were the house will be, the well digger is booked and the permit for the septic system exists. All we have to do is manage to keep within the stated setbacks and all should be well in a month or two.

I see in my future much chainsaw work and fighting with blackberry bushes.

This weekend we went out there to tramp around again, the snow has stopped, the rain let up for awhile and it was beautiful.

We discovered the inimitable power of the trees, and were surprised at it’s source. Cedar has seldom been so powerful.

The other week we experienced some snow which as usual caused the usual fear mongering in the Portland metro area, it was however incredibly beautiful out here in the foothills.

I have to make it clear the co-pilot took the pictures about now. 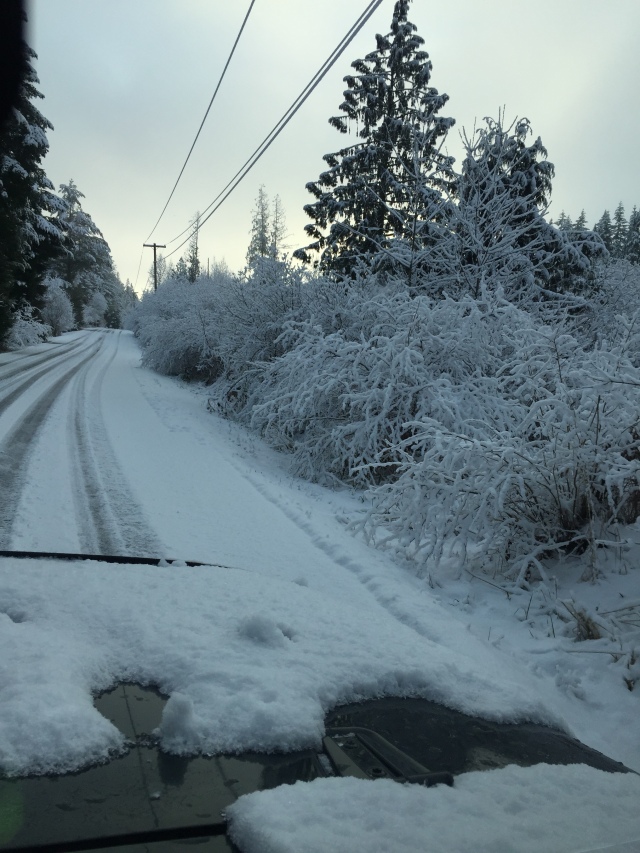 I toyed with the idea of starting a new blog for this stuff but as I have never really had a clear or consistent idea of what this should be I figured what the hell.

With any luck we should be moving pretty soon, seems like I have been saying that for a long time. I have been fighting the need to pack the records up but we are I believe getting close to that inevitable time.

Hopefully we will move so that I can plant some veggies as it’s been three or so years since we managed to have a garden of any sort, even if we don’t there will be blackberries.

Songwriters are  those minstrels/troubadours, strange mysterious creatures who hold a mirror up to our times or pour their tortured souls out for us to observe their innermost thoughts. They are our higher selves connecting with our souls to bring us truth and light. Or on occasion they are crazed loons screaming into the storms of life.

I have been tossing and turning trying to decide who to write about and how to write, I have unfinished thoughts on many a songwriter percolating in my mind. Let’s face it songwriter covers a lot of territory from Burt Bacharach to Taylor Swift, via Elvis Costello, Paul Simon and those other tortured souls from the 60’s and 70’s and beyond. It’s hard to know where to begin.

Recent events in the media have taken me to strange places thought wise as I have tried to find a way into this subject. I wanted to write about Ian McNabb or Mike Scott, really wanted to think about Van the Man or Neil Young, maybe Stephen Stills, Joni Mitchell, Carole King, Patti Smith or Dave Brock, not to mention Bob Calvert, John Martyn is a favorite or how about Simon Nicol, that one would be easy he has only released one song and a tune in his name, or Richard Thompson the list could go on and on.

I was attempting to come to terms with gun culture and paranoia and all I could think about was the moment on Flashes from the Archives of Oblivion when an audience member shouts “White Man” and Roy bellows back “you’ve got  a white man.”  I knew I wanted to write about Roy Harper but didn’t really know how.

A few years ago I loaned Death or Glory to a friend and he came back the very next day and handed it back to me. “He feels too much” was the comment. I think that is what we need now is to feel too much. From day one of his recorded output Roy has felt a lot, he also has done the other side of this which is to tell the world what he is feeling. In another age I may have mentioned his beautiful love songs, that are poetic, honest and earthy.  However this is the time to think of his social commentary, he is not a protest singer and does not write protest songs. He does write commentary on our human nature, spiritual and political but ultimately how we connect as humans. His strength is he will happily tell you how he feels and thinks, he will however not tell the listener how to think or what to do, he is a chronicler of our baser and better natures. 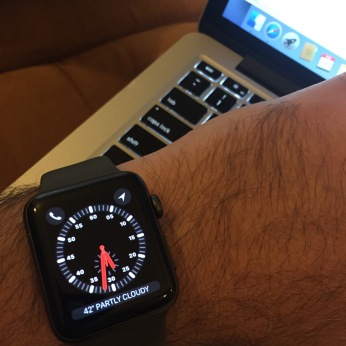 This year for the first time in 35 plus years I put on a watch. There are many complicated reasons including some to do with health why I made this decision, it did however feel like an abandonment of an ideal. 35 years or so ago I was sat on the floor when Roy sang the line “with your god on your left wrist.” This had a profound affect on me, I took my watch off and threw it into the mud under the pier in Southport, I would say sea but anyone who knows Southport would know the tide seldom comes in. Since that day I walked through the world with no really convenient way to tell the time. This made me look up for clocks, talk to people in the street and at times turn up late for meetings. It also meant I saw and met people I may not have if I had been able to look at my wrist.

Then cell phones arrived and suddenly time telling was part of my life again. I was pushed into being even more disconnected from the passerby and stranger. I no longer had to exit my own comfort zone for a mundane reason. To combat this I have forced myself into the decision to make the attempt to connect with  people during the day, to attempt to talk to one stranger at least in some way even saying good morning/afternoon/evening or thank you. Now I have the ultimate tool for (dis)connection in an Applewatch, now I can be contacted anywhere at any time, tracked, monitored and at the beck and call of work, home and anyone who has the number. In some small way I feel like I have compromised my ideals.

So this week as I along with the rest of the USA dealt with the ultimate result of disconnection in mass murder I turned to Roy. For 52 years he has been holding the mirror up to humanity. Singing into the wind like the Stormcock. I listened to idiots demanding that our schools become fortresses manned by armed teachers so our children can be caught in the crossfire. I watched the NRA spout hate and our politicians prostitute their souls on national TV and the children sound more adult than the be-suited men and women that sought to belittle them and steal their voice.

Like Roy so many times on stage I pointed a finger at myself and you and hollered:

“While outside in the whitewash
Where the guns are always, always right
A shooting star has summoned
Its dark angel from his night

So for 52 years Roy has kept his message pretty consistent, go listen to the records, take some time to be still and contemplate the world we have made for our children and what they are saying to us now. He may be flawed, opinionated but like any truly great artist he holds the mirror up and shows us ourselves, the difference with Roy is he places himself right there in the frame too.

Here is a brief selection of lyrics from every album, enjoy, squirm and get angry.

“You teach the children fear to gain some easy applause…”

Come Out Fighting Ghenghis Smith from well that album…1968

“I’m the rich man, the poor man, the peace man, the war man, the beast
The festive consumer who ends up consumed in the feast”

“How does it feel with your god strapped to your wrist?
And him leading you such a chase?”

How Does It Feel from Flat Baroque and Berserk. 1970.

“And you tell me that Grandad was a hero
That he fought for peace and no more guns
But you know I think he must have changed his name to Nero
You see that every time he grunts, he kills his sons.”

One Man Rock’n’Roll Band from Stormcock. 1971

“Where once were men are now but sheep
-A fiction and far cry
From planet earth’s proud animal
-Who would be you and I.”

“We might have to take the world the way we made it
It seems we have to find a fight
Though some of us ain’t satisfied with less than any Universe
I’m not sure that any side is right.”

These Last Days from Bullinamingvase. 1977

“And I cry in my sleep
For all the hungry children
And the unbelieving sheep.”

The Unknown Soldier, well from that album 1980.

:Whatever persuasion you are
You must open your door
If you mean to meet
Come and be counted in whispers of multitude
And come on your own feet
I’d love to be able to say
My old grandmother marched
To people the street”

Elizabeth from Whatever Happened to Jugula. 1985.

“But what I say ain’t worth a sheet
Is it mother?
Breaking methane through the seat
Listen mother
Lighting it to warm my feet
Only mother
How we gonna cool the heat
Cool it mother
And don’t make a fuss
Because otherwise
They’ll think you’re just a loony sitting next to me on the bus”

Loony on the Bus from well again that album. 1988.

Government Surplus from Descendants of Smith. 1988.

Come the Revolution from, The Dream Society, 1998.

The new government’s the old one
Same old handbags at the helm
Lapsing back into religion
Letting voices overwhelm:

Cloud Cuckooland from Man and Myth. 2013.