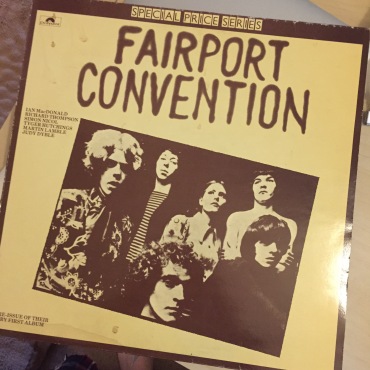 Often a bands first record is the great one, they have saved up all those songs they have been writing since puberty. Getting it all down on record for the first time. There is often an intensity involved in the belief that nobody else is going to give them a chance and they need to get it all out.

Fairport Convention managed to get a deal based on their guitar players skills. Then they released an album that if like me you came to after some of the other near classics in their canon is at first a bit of a disappointment. No fiddles, lots of covers, some okay original compositions and a silly tune about breaking down in a car. Yes there is a girl singer, she has a sweet voice, a little polite but very English, she’s not Sandy Denny though most will say.

Having owned this album for as long as I have. I now realize what a classic it is. Some of

the first English recordings of Joni Mitchell and a weird Dylan track in Jack of Diamonds. Judy Dyble’s vocals are the true star though, sweet and clear and if you can find the single with Ribbon Bow on with a sigh to make grown men sit up and pay attention. If you want to really hear how great her voice is go find the Trader Horne album Morning Way, it’s on nifty red vinyl very pretty, and who can resist red vinyl?, It’s of it’s hippy dippy time but less pretentious and tedious  than a Donovan album.

This Fairport Convention however is the band that jammed with Hendrix and Barrett at the UFO club, while their hippy girl lead singer knitted on stage, and was beloved of John Peel. Yes they went on to make flawed and better albums but there is something about a bunch of music fans getting together and being allowed to record their songs. It very likely would not happen now no matter how great the guitarist was jamming on East West.

6 thoughts on “Please don’t get us wrong man, this is just a song man…”