There is a moment when you sit and wonder what is going on, nowadays those moments are almost daily as the world goes crazy around me. I have a natural almost instinctive distrust of people in authority. I attribute this to early trauma from attending an all male Catholic School. The sneers and ridicule of the teachers still ring in my ears and my legs from the strapping. This results in a need to question authority at all times and be highly suspicious of the pat answers of the disdainful elite. All we can do is vote and hope, although for the disenfranchised amongst us that is not even an option.

Recently I have been a little stuck musically in the late 70’s and 80’s, maybe because this was the time of my teen and young adult years. When my ears were busy being invaded by music that was meaningful to me as my mind was being invaded by the injustice of Thatcher. I have always loved that classic rock of the 60’s and 70’s and been attracted to the over indulgence of punk and prog, that masqueraded as something other than rock’n’roll, but I grew up in that post-punk melange that the end of the 70’s and the 80’s wallowed in. A time when the progressive re-entered the sound and a love of the Doors made it more visceral and ambiguous.

Often I could not admit my love for the music of my contemporaries, more intent on the acceptance of my peers, but it was always there. Being from Liverpool melody and beat was always important and the musicians of the town were never afraid to nod there heads to Love and Mott the Hoople, Zeppelin and Syd. A town of musical snobs were your influences and the cut of your pants may be more important than the sounds you can make on a guitar. Many of my most beloved loves of what is now dubbed classic rock was discovered through the B-Sides and live cover versions of contemporary bands or the music played before the band strolled/staggered on stage.

This has become more strange with the passing of Pete Burns from Dead or Alive. I never knowingly met him but the myth of his antagonism to the paying customers at Probe Records on Button St. flavored a life of fear of the disdain of the people behind the counter at all record stores. Would they ever really understand why you are picking up that Phil Collins album along with The Clash and Magazine and don’t try and explain away the Ian and Sylvia albums, Neil Young covering your song is not enough to escape the sneers. In the early 80’s I used to peek into Probe to make sure it was safe to enter and still left my ears ringing with the mocking sounds of shock at how uncool my choices were.

This feeling was more apparent the other day as I picked up  the ABBA compilation for the young woman who is leaving work this week. I heard no judgement but deep in my heart I knew I should. Maybe buying from a thrift store as opposed to a real record store saved me. It doesn’t matter that this  record virtually guarantees free beer at the brew pub it is still unhip no matter how many thefts Elvis perpetrated on the band with Mr. Nieve, of course free beer helps.

I feel fairly certain that the fear of judgment actually made me make better choices in the record store, whatever that means. You don’t get that same sense of fear with a download or the helpful ladies at the thrift store. There is no gauntlet of disdain to run. No sneer or snigger meeting your purchase. You can literally slide a collection of prog, punk and pop across the counter 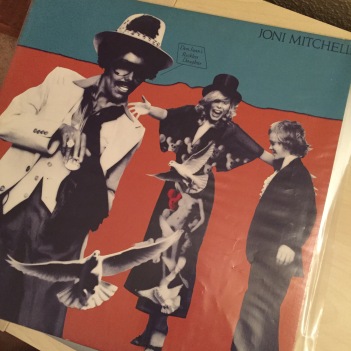 without comment. No discerning/concerned  look, just a gentle smile as you pay. There is no bargaining, I’ll let you buy that shit if you buy this record that will expand your mind. I think they may even feel a little sorry for the anachronistic behavior of buying a record when there are so many CD’s to be had.

In order to attempt to regain some self self-esteem I am laying here with a post election hangover and a need to make sense of stuff listening to Joni Mitchell’s Don Juan’s Reckless Daughter. It’s a disconcerting mix of strange tunings, jazz and orchestral interludes with Joni’s ethereal voice the anchor for the whole thing. One of the side effects of listening to any Joni Mitchell is that you suddenly become smarter, more attractive to your chosen sex and a true citizen of the world. Listening to this album allows you to truly understand how messed up the world really is and still hold onto the anchor of great art.

There is one lyric that jumps out now in Otis and Marlena:

The only way of fighting the current situation is to educate those you come into contact with. The populist and nationalist ‘ism’s are the bastion of ignorance and intolerance that are promoted by fear. We can individually help people understand this although it is a difficult push. It’s time to seek solidarity with those most at risk and none of them are middle aged white guys who are able to say it will all work out. Many people are justifiably afraid now as they look at that diabolical selfie in front of the gold elevator. Opposition to intolerance is now a requirement no longer a choice.

There is no great art that has ever been created by the lackeys of intolerance. There is however great art that has been created in opposition.It’s time to listen and view that art again and hope our contemporary artists are up to the charge. This is our time to stand in opposition and present the truth to our duped nations. Now I have to decide if it’s time to make a decision and vote and stop being a by-stander although it has never been so difficult to choose between countries.

Damn. I got all that from Joni so go take a listen.

Not much to say right now, but take a listen: