One afternoon in the mid 80’s I was asleep on my bed with the door open and Feel Like A Stranger blaring out into the hallway. Snoring away and oblivious to all around I woke to a small elfin redheaded creature sat in the chair who declared herself Delia from Poughkeepsie New York. She had been walking around the dorm feeling like a stranger when she heard the Dead. This to her was the sign of a kindred spirit and a natural friend. It was also the first time she had heard the Grateful Dead playing in the UK.

Dead Set was the album playing and I had borrowed it from Dave as he tried to convince me of the brilliance of the Grateful Dead and I tried to convince him Julian Cope was the new Sky Saxon as I loaned him Fried. Dave had also loaned me the companion album Reckoning. 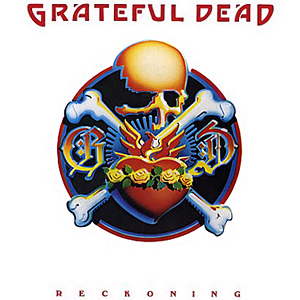 Set was the electric album and Reckoning was the all acoustic set. Both albums were fun and had a lot to offer although Reckoning was the better as it did not have that 80’s synth sound pervading it and avoided the disco-Dead tendencies.

Both had stellar album covers and continued to enhance the image of the band in my eyes, but why did they have to sound so safe.

Now in all the best stories this would be the beginning of a whirlwind romance that would be wild and outrageous and involve a roadtrip of discovery and joy. It may also involve a brush with the law and or a chase across the Yorkshire moors in the dead of night.

In truth it led to a close friendship as she found herself way more attracted to my friend across the hall, although we would sit together in the dark slightly befuddled and listen to the Dead into the early hours until he came home from work. She had seen the Dead live and I was in awe of their image but slightly confused by their music. There seemed very little danger apart from the jamband anarchy that went along with them stretching out songs to their limits.

I introduced her to Roy Harper, Fairport Convention, Hawkwind and Bert Jansch and John Martyn, she convinced me Neil and the Shocking Pinks was a work of genius and Dr. John had mystical qualities and that Capt. Beefheart deserved my attention. Eventually she went back to New York and I went east and then south leaving Liverpool for a number of years. I gave Dave back his Dead albums and tapes and wallowed in Bowie, Bolan, R.E.M. and a post punk fog, although I was still convinced that the Shocking Pinks album had the secret to the universe if only you listened to it during the dark of the moon wearing blue suede shoes and an alligator skin belt.

I have to admit I streamed these albums as there is no way I can afford to buy all those Dead albums ever.

One thought on “Year of the Dead set and reckoned with…”