I remember one sunny spring day sitting in my French mock O. Level at school, understanding that I had no idea what I was writing and yet doggedly continuing. Madame Rimmer had not managed to beat French into me after four years of failure to remember French vocabulary and in this moment I was actually going to do bad enough that I would not have to take the final test.

My mind was on the number 10 bus that would take me to town to buy the newly released copy of Church of Hawkwind, which was going to be much better than trying to understand what was happening on the test.

A half hour after the fateful bell ring and three record stores later I could not find a copy of my desired Hawkwind album. It seemed that the rabid mob of fans had descended on the stores earlier than me and had their copy leaving me with none, no special booklet and new Hawkwind music. Determined to not go home empty handed I grabbed a copy of PXR5 which had one of the worst covers ever and went home. 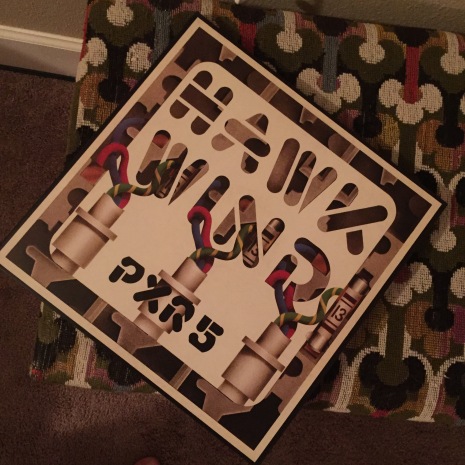 There is something so attractive about the Calvert Albums with Hawkwind. They are humorous and have a pop sensibility that is almost dance friendly, well in the sense that you can throw yourself around with abandon. They also often had titles that influenced my reading. So from PXR5 I had to read High Rise by J.G.Ballard and Zelazny’s Jack of Shadows and delve further into Asimov’s Robot series.

PXR5, is one of those built to suit Hawkwind albums, part live, part studio, part Dave Brock solo album and yet it still holds together as a whole album. Cohesive in that shambolic way that only a Hawkwind album can be. Filled with classics and obscurities it never the less manages to captivate. The almost Bowie sound of High Rise, the chaos of Uncle Sam’s On Mars, the punk of Death Trap and the out and out throwback sound of Robot.

On reflection I dodged Church of Hawkwind which may have reached new lows for a Hawkwind album at the time. You can argue it was more of a Brock solo electronic experiment but you would have to be stretching pretty far to do that.