From the intimidating to the ecstatic. B.S. as my pal Greg would say, it’s just rock music. 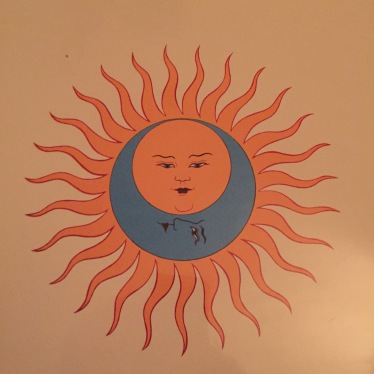 Fearing the Dead this week I reveled in more Crimson with the incomparable Larks Tongue In Aspic. Which apart from being truly great has the happiest of all Crimson covers. It is a pretty cover admit it.

The first place most people go in Crimson world is the outrageous guitaring of Mr. Fripp as he plays those angular phrases and wails making very little motion. Having seen the seven headed beast of Crimson last year with the three drummers I have begun to appreciate the drums man.

On Larks Tongues the accolade for most interesting sounds must go to the craziness of Jamie Muir and then  to Bill Buford for holding the beat down with all that insanity going on. The Crimson drummers have always made a sound that would dwarf the Dead’s insistence on a creation the drummers could climb into and beat on anything that came to mind. Crimson likewise have drummers who will flail beat and pound on anything in sight but they do this in a restrained manner that befits the image of the ferocious accountant. Muir however  was before this image throwing chains above Fripp’s head and using the laughing bag as an instrument in an insanely eccentric way. Only appearing on the one album he is however all over it, his rhythmic enhancements taking the listener to obscure places in their minds.

It seems like much of my relationship with King Crimson has been just a little furtive, during the late 70’s and the 80’s they were too unhip in most circles, very few got the violence in the music preferring to criticize the progressive moniker, the dreamy mellotron and focus on the often poor or cringeworthy lyrics.The secret is however in the music that wails and swoops propelled along by a rhythm section that was fearless in tackling strange time signatures often during the same song and holding it all together during an intensity of musical expression that is both violent and ecstatic.

When inviting people back to my apartment in the dim 80’s I would at times hide the Crimson albums behind the more acceptable Pogues albums. The fear may be I would never find a friend my own age if I carried on with my obsession while others around me were entranced by Mr. Bragg and Paul Weller.I also may never have any conversation with a member of the opposite sex, at 19 this was very important. To this day my wife will hide when the Crimson albums come out, she will frown and mention the difficult music.

It is at this point that I must remind myself that it is just great music that will mess with your mind as all great music does but only if you let it.

Enough of this and back to the Dead, although those Midlake albums I just acquired look very enticing.

Note the weirdness of the elusive Mr Muir as he flails and bangs his way to musical oblivion on the first two tracks.