Sometimes things just happen for no other reason than you made the right turn. After dropping number 1. son off to fill in his paperwork for his new job I decided to stop off at that enticing looking thrift store.

After rooting around for a few minutes in the records I realized this was the remnants of somebodies record collection, you don’t often find that any more. I picked through grabbing some Tull, The Who and about 8 other albums. As I checked out my haul for scratches scuffs and other problems another person sidled over to the records with a look of dejection, “you got the? oh and the?”

Smugly I grabbed my records and headed for the checkout and spent my $10 and realized that I could stop trying to decide if I should by that copy of Thick as a Brick now as it was in the haul. I then also realized that in some weird way crate digging is a really competitive sport as I watched Mr. Dejected digging through the stacks and knowing there was very little there beyond the usual Cat Stevens and almost every Elton John album from the 80’s. 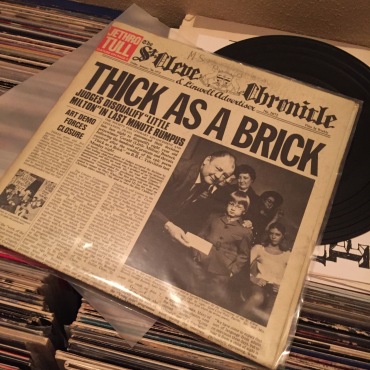 So after cleaning them all up it was time to sit down with Thick As A Brick and it is as much over the top fun as it ever was complete with the folding out newspaper with all sorts of double entendre’s and schoolboy humour. My wife complained about the noise and kids retreated to their computers and I was somewhat satisfied that in my advancing years I can still annoy everyone within earshot with my questionable taste.

2 thoughts on “Mark the precise nature of your fear…”