Some albums are so positive that the can be a little intimidating to the perennially cynical, but some albums are just so damn good. Motivation Radio is the musical equivalent of one of those smiling speakers who tell you all you have to do is believe in yourself to succeed. The difference is Steve Hillage really believes it and seems to live it. It is almost the Gong story without the pixies, although the Octave Doctors turn up and Radio encourages you to tune in to the higher energies of music. 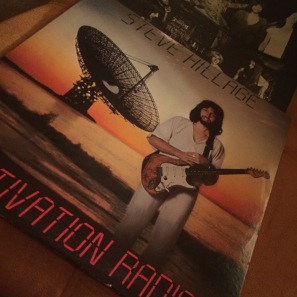 space telescope enthusing about the Light In The Sky and Saucer Surfing. He was the guitar of Gong as well and that made it extra essential.

My first ever copy of Motivation Radio was picked up second hand at Probe records, in fact the grumpy salesman gave it to me as I bought a copy of Moat on the Ledge by Fairport Convention. This is the only recorded time a salesperson at Probe Records ever did something for another human being. That copy had seen better days the cover was stuck together and the inner sleeve was missing. The record played fine though and that was all that mattered.

I was truly delighted to discover later on when I saw a friends copy of the inner sleeve that T.O.N.T.O. was the synth on the album. Imagine a synthesizer that filled a room. Tonto was legendary in my circle of friends. Galvin had a copy of Tonto’s Expanding Head Band and we would all gather to be wowed by the album.

Also which Kaftan wearing hippy worth his salt didn’t have a crush on Miquette Giraudy.

So if you are in the mood for music that has insufferably positive lyrics, is catchy, has pixies, flying saucer’s mystical radios and more Tarot references than you can shake an incense stick at then Steve Hillage is your man. It’s a lot of fun as well and is guaranteed to make you smile as the cold rainy fall days start to bring a chill to the day. This album also made someone at Probe Records be generous which if you are from Liverpool or environs you will understand to be the next thing to a miracle.