So this week I bought a Jeep Wrangler, well the head gasket went in the 4Runner and the radiator was cracked in two places, all the hoses were leaking, the A.C. no longer worked and it was going to cost more than the vehicle was worth to fix it. So we had to go car shopping, something a little larger than my wife’s Corolla so we can get everyone in and go camping, hopefully with OK gas mileage. Well that never worked out, it’s smaller in some ways than the 4Runner, has the same gas mileage and now we have a car payment.

It’s the four door version so on some level and in some quarters is not a true jeep but what the heck some people think Coors light is beer. Yes I know it’s a gas guzzling monster and in this time of high gas prices and green awareness it was a bad decision, I really should have bought the hybrid, or the focus. I know it’s loud on the freeway and the soft top will probably leak during rainstorms, it will be cold in the winter and I will be judged by the people I pass, or more likely am passed by, but I have to admit I couldn’t resist.

The whole concept appealed to my inner child, or mid-life crisis, that and finally coming to realize I was never going to buy a Land Rover Defender when a ’93 was going for $32,000. So I bought a Jeep. Here it is in the dealership.

Then all of a sudden you realize that there are all sorts of things you need to do, it’s needs a small lift maybe, new tires, an antenna that is not 5 feet long and distracting while driving, a roof rack, harness for the dog and on and on and on.

Buyers remorse set in until the first time I took the top down, it only took an hour to get down due to inexperience and the confusing directions in the manual. Don’t ask about the confusion putting it up. I had never driven a convertible before. It’s fun to drive and of course people wave to you. Then you start to rationalize, I can go 4 wheeling, back country driving will be more exciting with the top down than it was in the 4Runner, but ultimately it’s just plain fun, and it didn’t leak in the rain storm and the heater is powerful so it’s not cold.Then there is the fact that when society collapses due to zombies, pandemic disease, Triffids and bright comets then we are already 50%  better equipped to escape the town on the back roads of Oregon, as long as it is not an EM pulse. Now I have to find the survival kit to be fully prepared.

There is of course the reading, constant and at times potentially intrusive but as I will no longer be able to afford to leave our house in the new vehicle because of the car payment it’s good there are lots of books.

The last couple of weeks have seen the end of Inverted World by Christopher Priest which was an interesting account of a city travelling out of sync with it’s world.

It also seemed to be about imperialism and it’s affect on indigenous populations, especially when they are faced with a more technologically advanced society. It was a fun read Priest definitely writes with skill as he should considering some of the scathing criticism he directs at others.

The biggest surprise however for me was Lloyd Biggle Jr’s Monument. This was a book filled with humor and wisdom and managed to pack a lot into 200 or so pages. Again Biggle is a new author to me and I was pleasantly surprised at how well he writes.

Written in 1974 the story like Inverted World deals with a more advanced societies impact on an indigenous population. In Monument however the natives are lucky enough to have a Plan handed down to them by their Langri. This is a story with a message but it is delivered with humor and compassion, there are also a few plot twists that make for a great book.

I also managed to begin Icerigger by Alan Dean Foster and Snow Crash by Neal Stephenson. Icerigger is an old favorite that has been waiting to be reread and I am looking forward to it, especially as I have the other two books in the trilogy now. I have been looking for a reasonably priced copy of Snow Crash and finally found one in a Goodwill store for $2.99. 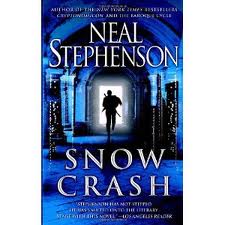 Snow Crash is also this months modern read at the Classic Science fiction Yahoo group,  http://groups.yahoo.com/group/ClassicScienceFiction/, were it has already caused a little stir because of it’s stylistic elements and Stephenson’s writing style. I have enjoyed all the Stephenson books I have read so far, the Baroque Cycle may be one of the greatest series of books I have ever read, but he can at times be a bit too clever for his own good.

All in all it’s been a good couple of weeks, the garden is coming along well although I think I only planted onions and beans this year for some reason.

It was also a reasonably good haul at used bookstores this last couple of weeks which have filled up the space on the fireplace. The ax is obviously in case of zombie attack,  the gold piggy bank is the book fund and the Costa Rica book is for Michelle and Ben who go to Costa Rica next summer and are super excited about it as they should be.