Reading was Replay By Ken Grimwood. It’s a good book concerning rebirth time travel and possibilities. It is also full of cliches, especially as the protagonist makes his money gambling, takes a dive in the gutter and is ultimately saved by love. He is also not the most likable of characters. It is however well written with enough differences to make it’s shortcomings forgivable.

I know this opinion is not popular about this book. It won an award and was very popular at the time, what can I say though apart from it’s only an opinion.

I have also been reading Directive 51 by John Barnes, this is a fairly straight forward modern science fiction thriller. 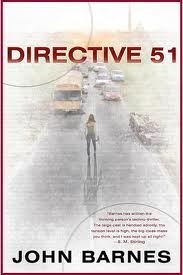 It is a fun apocalyptic novel, with the world being threatened by terrorists seeding biotes to attack oil based products and return the world to a simpler time. It is reminiscent of Kevin J Anderson’s novel Ill Wind. It looks like being a fun undemanding read.

In other news Tom came home from College for the first time this month. An event that made everyone happy especially his brothers who had definitely been missing him, as had I. He came we did laundry he ate like a voracious animal and then left, such is going to be the next couple of years. He is of course thoroughly enjoying his new freedom which is as it should be.