Finally I have entered the 21st century with the acquisition of a Nook. This was not a purchase but a prize in a raffle, it’s gently used and the 1st generation Nook but all the same a Nook it is. 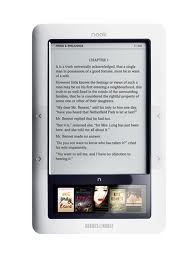 Now I can download thousands of books to go along with the hundreds sitting on the bookshelves, more books to attempt to read. It’s a little disappointing that e=books cost as much as real bo0ks and they have virtually no overhead involved in them. You can borrow from the library though and there are lots of free books around if you search them out. I haven’t read anything on it yet but the big trip to England will be the first outing. We shall see how it goes, seems to be a bit like borrowing rather than owning a book though, hey ho it’s the words that matter I guess.

I’ve still been reading although not writing, which may be preferrable.

Someone asked me the other day why do you write something you will not share with others and nobody therefore looks at, the answer is not as easy to quantify as you might think. I write a lot for work and lots of people get to read it and therefore criticize it, this writing is for me, to open it up for others would allow criticism and to be honest I really don’t always feel like placing my private writing  under the same scrutiny as my work writing.

However Thomas and I are going to Europe and I may allow access to some so they can keep track of me.

To the reading. Well I moved from one god book to another, this time Robert Sawyer’s Calculating God.

It is the first book by Sawyer I have read and was an enjoyable read. Full of warmth and humor which is surprising as the book is largely a conversation between an alien and a man regarding the existence of god. The surprise of this book for me was how well Sawyer writes the alien, there is alienness obviously, she looks different than humans but there is also an genuine connection between Holluss and Tom. They have things in common they grow to love each other and share the same concerns and flaws. Also what genius to make the alien female, how many male aggressive aliens are out there, how different for this contact to be a female scientist.

A good book with a flawed ending but a very different read. 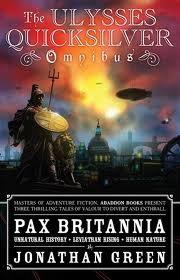 The on to something different, my first steam punk novel. As we are going to England how convenient that the Pax Britannia omnibus arrived in the mail. I love the novels of Haggard, Conan Doyle, Verne and Wells and this series is very much in that vein. Boys own adventure, explosions, damsels in distress and the fate of the empire on the brink ate very turn of the page. Ripping yarns with a hero who seems part Jerry Cornelius, part James Bond and all stiff upper lip English Gentleman with a sardonic grin and an eye for the ladies. This is Victorian England with a twist.

Lots of fun, well written, memorable more for the spectacle like a summer block buster than the ideas. There are two stories left in the omnibus that I will read as who can resit a hero called Ulysses Quicksilver, I may even search out the other stories in this franchise.

What would happen if the USA was governed by a hereditary presidency, had a fully functioning feudal system and was overseen by a fundamentalist christian watchdog that required all religions to meet the same standard of conformity. Some might say that would be a good thing and others may say we already do.

This is the world of Julian Comstock after the efflorescence of oil. Like Pax Britannia this is a book written in a style of the past but it is a book that holds mirror up and says this is what might happen if you are complacent and allow the corporate aristocracy to continue to hold the purse strings the way they do. It is also timely as oil becomes more expensive as a commodity and investors move towards land as an investment.  This is really a possible future, it is not a post apocalyptic novel but a fairly reasonable extrapolation of current events, especially valid as this week we watch the intransigence of our political system being held hostage by fixed thinking on both sides of the aisle.

Wilson with this book has done what many Victorian novelists did which is comment on their society while at the same time tell a good story and he has done it with a consistency of style.

Well it was a couple of weeks ago really but it was a great weekend at the beach. There was window washing, a construction project and fun and games.

It really is a good place to be. Somewhere to get away from work and relax. 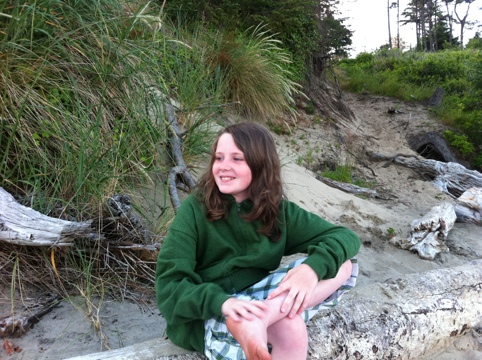 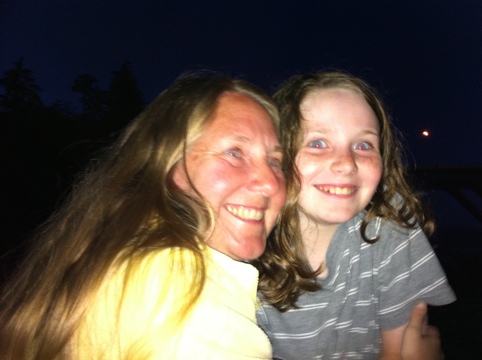 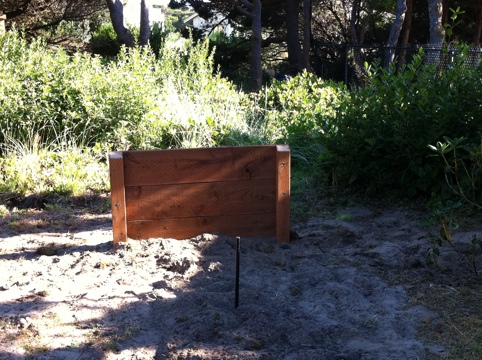 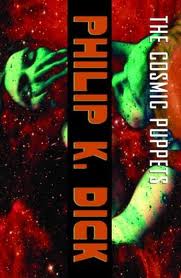 Philip K. Dick, along with Ray Bradbury is an author that it is almost impossible to effectively criticize without attack from the rabid fan base who will hoist you on your won petard. Like Bradbury however Dick is able to tell a story in an effortless and all enmeshing way.

I am not sure if anyone would ever class this as one of Dick’s greatest but it is an engaging story that envelopes you almost immediately. This would have made a great twilight zone episode, it is a mysterious story where from the start everything is not right, it also connects on the level that everyone can imagine returning to somewhere from childhood and discovering that everything is not as they remember it.

The ending is a little disappointing but the journey to the end is well worth the miles traveled. It really is no surprise that so many of Dick’s stories have been filmed they are so good. Maybe I just joined the rabid fan base.

Just a few weeks until the big journey begins with my adult child, there is a strange concept, Thomas. The plan is to return to England and visit his grandparents and celebrate a coming of age for Thomas. This is a time of great joy, pride and sadness, it is hard to give up those ultra-protective, some might say controlling,  instincts,  I have.

We don’t’ really have a plan apart form the Cropredy music festival, some time in London and then a drive through Wales back to my parents. Maybe we will blog maybe not.

The Kink’s “Long Way From Home” is one of those songs that takes you by surprise makes you pause and think, Ray Davies is the master of this sort of song. This at times truly expresses some of the thoughts that go through my mind as I watch my eldest getting ready to leave his home.

It is also poignant as I get ready to take Thomas back to England to visit his grandparents. I have really for the last 16years living in the USA been at home but at the same time a very long way from my roots.

Anyway the link to the song is above if you have the need to hear it.

The reading continues. The shelves are flooding and I have made a vow to buy no books before the England trip, I will use this trip to search out some J.G.Ballard though as his books are difficult to find in the USA even with my willingness to buy online now for those difficult to find books.

A major part of my shelves seem to be groaning under John Brunner’s books, “Stand On Zanzibar”, “The Crucible of Time”, “The Sheep Look Up” and many others all stare at me begging to be read so going against the grain I chose “The Children of Thunder.” There was no reason apart from it was not one of the classics of his so it may be good to begin with something a little more unknown. It is not a bad book by any means.

It has a good premise for a story, set in the eighties at the onset of the awareness of AIDS and the paranoia that accompanied that disease. Along with the very right of center emphasis of the political landscape it is set in, racism, paranoia, fear, poverty and wealth, all were part of the eighties I remember growing with.

The book however is a series of connected vignettes that do make a cohesive story, but the sum is definitely not better than the parts. Brunner is  a skilled writer but the obvious nature of the ending with all the children being the off-spring of one man was a  disappointment as I was hoping for something more sinister, involving pollution, government experiments etc. All these elements are in the story but just left hanging.

Also my biggest question about the story is why did the children all end up using their powers for selfish gain, not one child could see outside itself. The reason given in the book is lack of parental involvement from birth parents as the majority of the children were products of artificial insemination.

So it’s the third but the fireworks in Wally world happen tonight and tomorrow is the parade. This is a grand colonial tradition. 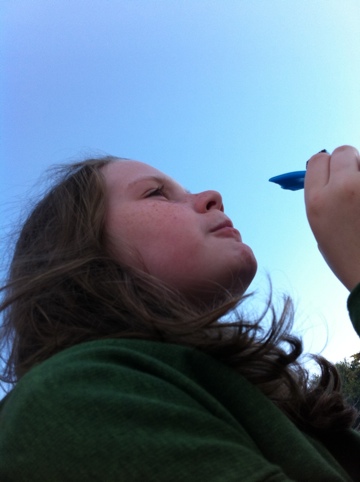 Michelle and Ben have been at the beach for almost two weeks. One week with Michelle’s friend Anna and her kids.

So I drove to the beach tired after work and has a wonderful weekend. 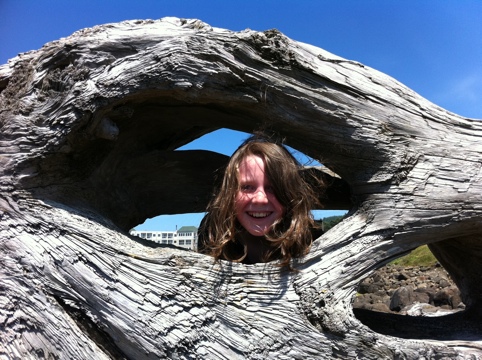 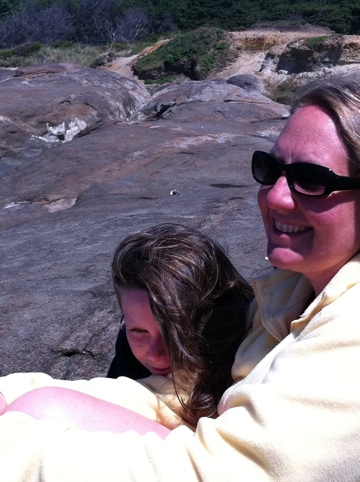 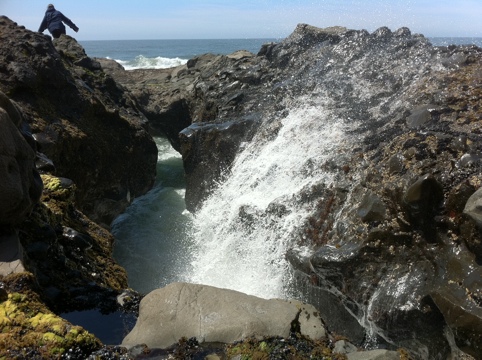