So it’s time for a change and a new site to host the blog.

Tom and I are are going to the UK in the summer for three weeks and I was going to turn this into a document about that, the other drivel that is on my mind and science fiction as well, as the reading project continues.

The reading has become more interesting. I am realizing that science fiction as a genre covers much ground. I am drawn to the stranger weirder side of the genre as demonstrated by Ballard, Moorcock, Vandermeer and Mieville. It is also fun to just throw yourself into a good story though that may not be so challenging but is a ripping yarn all the same.
So right now it’s Chris’s bass lesson with Don the bass dude in his garage/studio. Chris really likes his bass lessons it’s make up time though with hour and a half lessons.

This weeks soundtrack has been back to Here and Now, Planet Gong and Alternative TV. Still firmly stuck in the late seventies and early eighties, some things really never change.

The last couple of weeks have really been involved with planting in the garden, many beans, peas, oregano, basil, lots of onions, green and otherwise, peppers, squash, zucchini, spinach, the strawberries have their own space and the return of the dreaded cucumbers, two years ago there were so many cucumbers I ran out of ways to use them. It is so much fin to grub around in the dirt although every time I dig a hole the dog puts his ball in it to be thrown.

>Books used to be shorter in the 70’s have you noticed. David Gerrold’s Space Skimmer is one such short book, just over 200 pages in my version.

The Human Empire has ended, in fact it’s nowhere to be found and Mass is looking for it, really he is looking for the lost Space Skimmer’s which are faster than light craft that zoom the Human Race around the galaxy.
This is a story more about communication and connections than high adventure. In the end and not surprisingly for a book written in the early 70’s we discover that love is the answer to all, once the five characters can learn to communicate effectively and love each other all is well.
This was a good read not space opera but filled with ideas. Not surprising as Gerrold was one of the creative forces behind Star Trek. It was also extremely refreshing after the disappointment of the Brian Aldiss Dracula fiasco.

Planning continues for the big European trip. Some reviews of hotels and hostels are quite terrifying though. It is however fun to think of the things to do and the stuff to experience.

>I’d forgotten about this book, maybe I tried to forget about it at the end of the day, it really was a wretched thing and worse still it is by one of my favorite authors. Although I was not enjoying it I am cursed with the need to finish every story I begin, the urge to know what happens next is too much. Nothing can really prepare anyone for the terror that is:

If you should chose to read this horror then you will have to go on the journey with a strong stomach and a spirit of hope. I was not sure whether this was set before or after Frankenstein Unbound although by the mid-point I had given up and it became an endurance task to get to the end. I cannot even remember where this came in my reading, I also have little recollection of the story, there is a train, time travel, vampires and Bram Stoker with syphilis.

Brian Aldiss is however one of the greats of science fiction, maybe he needed a new house or a pool or to pay his taxes, there has to be a reason.

In other news tickets have been bought for Tom and my trip to the UK, also tickets for Cropredy are purchased and hopefully will arrive before we leave.
It will also be an opportunity to shop for J.G. Ballard books. Also maybe the blog will become a more entertaining prospect.

>Well things are certainly busy, a week of the Icicle Works on constant replay followed by another week of Fairport Convention is a panacea for all ills. Very exciting week as it looks like we will be able to attend the Cropredy Festival this year, well Thomas and I will be able to. 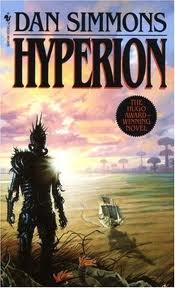 A fairly busy reading schedule has been going on, I started out with Dan Simmons Hyperion. This series is one of my all time favourite reads. I only really have a memory of this the first book, I am going to spread the other three books throughout the year as a way of pacing myself on some level. It is one of the few series on my shelf, another being Asimovs Foundation series. Everyone should take the time to read Dan Simmons he is one of the few authors who can cross genres well, covering horror, science fiction, crime novels and now historical fiction  albeit with a hint of the macabre.

Next was Zelaznys Dream Master. I usually enjoy Zelaznys work but this time I was just too distant from the characters, I did not really feel any sympathy for any of them, even the youth in the book was distant and cold. It was a fascinating idea though of a therapist getting caught in the construct of his patients mind.

The Space Merchants was a much more satisfying read. Mostly a political diatribe against consumerism and the influence of large corporations it nevertheless had an engaging story and like able characters. The biggest surprise about this book is how long ago it was written, the majority of people would have the opinion that science fiction written in the 50’s would have little to no relevance for today, in this case they would be wrong.

McCaffrey’s first novel and not her most successful. Ostensibly an attempt to present a strong female lead role into science fiction, the novel reads more like an historical romance were one event after another pushes the main character around from one situation to the next.
Many of the themes McCaffrey would use in the Pern universe are here, the mix of high tech and a more pastoral lifestyle and non-traditional relationships, although the technology is something stolen not something forgotten and rediscovered. The culture of Restoree is not a rich or well realized as Pern though.

Rereading Heinlein is a rewarding experience, sometimes though I wonder how the teenage me got through the long philosophical passages, in fact there is not much what we would call action today. This is true of Revolt in 2100 as well as Starship Troopers, both books are concerned with ideas not necessarily action. Revolt n 2100 is a cautionary tale of allowing radical fundamental Christianity to  meddle too much, if at all  in politics. The book opens with the US in the grip of a theocracy caused by the alliance of fundamental Christianity, TV and an advertising company. Heinlein saw it as a possibility ion the 40’s it is still possible now, this makes the novel even more chilling, a story that is still relevant.