>I’ve been neglecting the blog, as if anyone noticed. It’s a strange experience to write for yourself. It’s been a few weeks of living with the music of the past, Here and Now, Gong, Hawkwind, the Inner City Unit and Robert Calvert along with many others from the left of alternative scene of the eighties. So many ideals squashed by the jack boot of Thatcher’s Britain. 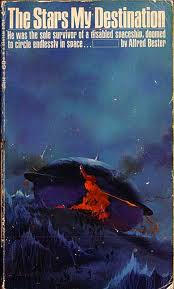 On to the next book. A book written in 1956 that has all the violence and attitude of a modern book. A tale of revenge that was so intense a read I gulped it down in one bite.
I’ve not been avoiding this book but it is almost so famous that you feel you don’t want to or need to read it. Well worth the time and also on every list of greatest science fiction out there. Not without reason either.
Having now read it I can see aspects of the story in other novels, most recently for me in Dan Simmons Hyperion as Colonel Kassad struggles to survive after this hospital ship is attacked by Ousters, he even looks for a closet in his leaking and ill fitting space suit.

Then Mia’s tale in Panshin’s Rite of Passage. I’m not sure what to think of this right now, part Heinlein part sixties ideology and part coming of age tale and ultimately not as satisfying as it could have been. It may be that Panshin himself grew up as he wrote this tale, he went through an argument with Heinlein, his time in the service and then on to life. The many natures of the book may have more to do with Panshin maturing than Mia.
I think this is a book that is deceptively simple on the surface but more thought and rereading may bring out it’s true nature.

Last night was the big Robert Plant and the Band of Joy show, a truly unique musical experience. Gone is the posturing of previous Plant shows and replacing it is a prowling monster of a show that covers everything from psychedelia, hard rock, folk and then eastern influences, maybe Plant has come into his own finally as a live artist.

>I was a really exciting two weeks or so of reading, both books were new to me and one author was unread by me.
Samuel R. DeLaney is the new author, for years whenever I went into a bookstore I would look at his books and move on to whatever was on my mind at the time. His books where always there, just not being bought it seems. Babel17, Triton and Dhalgren always were sitting on used bookshelves waiting to be discovered. Once I started the list however his books seemed to be gone, someone else was discovering the worlds of Samuel R. DeLaney and now I could find them nowhere. Eventually in Powell’s I found DeLaney, I bought The Einstein Intersection and Triton and put them on the shelf, it was last week at the beach I began the Einstein Intersection.

It’s a book that  begins in the middle. Earth is no longer populated by humans but by a race that is striving to be “human” or at least what they think of as human. The idea of what is normal and mutation becomes much more interesting when viewed through the lens of a race attempting to realize the “ideal” of humanity through it’s mythology. The myth of Orpheus is threaded throughout the novel, with dragon herding cowboys and enticing leftovers from humanity. It’s a wonderful read that left me wishing for more and I now wish I had begun reading DeLaney’s work earlier.

Finally I found some Ballard to read again, unfortunately I had to get it from the library, unfortunate because I would love to own this book. It’s a strange book about a jungle becoming crystallized, we find out in the book that this is happening around the world and it is intimated that this will become a global change. It is a book that has it’s own atmosphere, everything seems to happen in slow motion and is almost predestined. It is a very English book with the characters accepting their fates and in the case of Suzanne and Sanders almost with relief.
My search for more Ballard goes on, I am looking for the Drowned World and High Rise, my journey to England later in the year may help with this.

I have now abandoned the list, allowing my reading to go were it will as I look at the books on the shelf. I also joined ann online reading group for science fiction which should be interesting. It’s here: http://groups.yahoo.com/group/ClassicScienceFiction/ anyone is interested.

The last couple of weeks have also been spent reminiscing on the music of Here and Now, one of the great bands of the late 70’s and the 80’s that never made it, mainly because their political leanings drove most labels away and their insistence on playing at free festivals and free shows was so different to the selfishness of Thatcher’s United Kingdom. So it’s been a good few weeks.